If you’re looking for information about radiation dermatitis treatment with CBD topicals, you or someone you know, probably received a cancer diagnosis. It’s estimated that more than half of those diagnosed with cancer will undergo some kind of radiation therapy. You probably also know that radiation therapy can create blistering and painful burns. But, that isn’t the case for everyone, especially if you are forearmed with Lost Remedy Burn Formula.

Let me tell you why, but first let’s cover the basics.

What is radiation dermatitis?

Using X-rays to treat cancer, radiation destroys cancer cells, as well as healthy cells, and can even shrink tumors. However, everyone responds differently to radiation treatment. Plus, the amount of radiation you receive is a factor in the scope of side effects.

Although there is a lot more information on side effects, for this blog, I’ll just focus on radiation dermatitis, or radiation burns.

Turns out, cannabis might just be the thing. Anyone who has undergone radiation treatment knows that at about three weeks into it, the burning starts. Beyond burning, a patient also deals with blistering, increased appearance of aging, dermatitis and sensitivity to sunlight.

In general, doctors recommend aloe vera or other creams to help soothe the burning from radiation. As most cancer survivors know, however, they don’t do the trick. At Lost Remedy, we created the Burn Formula so you can buy radiation relief CBD cream specifically to prevent radiation treatment side effects.

The best CBD for radiation burns will have several properties. Pure, organic aloe vera gel is the basis for its soothing, burn-relieving formula. Added protein and vitamin-rich avocado oil are combined with carefully selected essential oils organic and hemp-derived CBD oil to complete the package. The simplicity of this formula translates to instant, cooling relief.

The way to prevent burns is to apply the CBD topical to skin surrounding the area of radiation. The effects of radiation will go beyond the actual treatment area. Apply the cream as soon after radiation treatment as possible. If needed, apply several hours later. Very important: make sure that the area to be treated with radiation is clean and free of any residue before the next treatment. Also, apply to the area on days you don’t have radiation.

How do CBD Topicals work?

Our bodies already contain cannabinoid receptors, (CB-1 and CB-2) which we produce on our own. This phenomenon was first discovered in a 2003 study published in the Journal of Neuroreport. It reported that moderate exercise activates the endocannabinoid system (ECS), which we all have. The ECS and its receptors maintain homeostasis, or balance, in our bodies.

Further study by Ananya Mandal, MD, has shown that, “Cannabinoids exert their effects by interacting with cannabinoid receptors present on the surface of cells in different parts of the central nervous system.”

In short, CBD can aid in faster healing because topical application jump-starts the CB-1 and CB-2 receptors in the area of the burn. Remember the receptors’ job is to help maintain balance.  Applied topically, the CBD radiation relief cream efficiently and effectively causes the ECS response that triggers repair. Although CBD on its own is a powerful anti-inflammatory, when combined with carrier and essential oils, its power multiplies, helping to target the area with pain-relieving penetration. Some of those essential oils are cooling agents that also help soothe the burn. Look for this combination of oils when you buy CBD radiation relief cream. Why? Because it hydrates and helps soothe the skin, reducing burning.

Are CBD topicals safe to use?

One of the beauties of 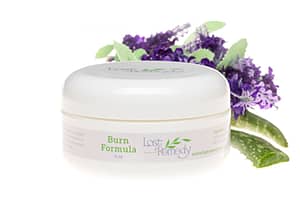 CBD is that it has few if any side effects. A real boon if you are facing radiation treatment. However, don’t think it will help heal the cancer. It’s prevention that can help alleviate a side effect of radiation treatment. At the same time, it nourishes and hydrates the skin, which in the long run will help keep your skin healthy and pain-free. Talk with your doctor or nurse about using CBD topicals. Then choose your product carefully. Not all CBD topicals are created equal.

The most important consideration should be given to the way the hemp is grown. It should be grown as organically as possible without using harmful herbicides, pesticides or growth enhancers. Second on the list is the manner in which the CBD is extracted. Look for a product derived from CO2 extraction. This is the most expensive extraction method, but by far the safest.

There you have it. If you or someone you know is heading to radiation therapy, good luck. Plus, add CBD to your self-care. It could make radiation less difficult.