Although it’s a rare condition, it’s real and even has a support group. Those dealing with erythromelalgia call it EM for short. I’m going to use that because it’s easier. Forgive my laziness.

According to multiple medical sites, EM is a rare condition that can cause a burning sensation and redness mainly in the feet. It can, however, also manifest in hands, arms, legs, ears and face. In the case of the daughter whose mother emailed us, her case is severe and covers her body.

As with any condition, the level of pain, redness and discomfort can vary among individuals. Sensations can range from mild tingling to full on burning that hampers walking, standing and other activities the rest of us take for granted. Duration of the flareups can last minutes, hours or even days. 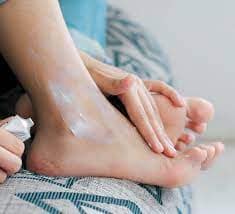 Not a lot is known about the cause of this condition, but the MedLine Plus website noted that mutations in the SCN9A gene can cause EM. The website goes on to explain how the mutation affects people. “The SCN9A gene mutations that cause erythromelalgia result in NaV1.7 sodium channels that open more easily than usual and stay open longer than normal, increasing the flow of sodium ions into nociceptors. This increase in sodium ions enhances transmission of pain signals, leading to the signs and symptoms of erythromelalgia.”

“It is unknown why the pain episodes associated with erythromelalgia mainly occur in the hands and feet.”

Flareups can be triggered by increased body temperature from exercise, entering a warm room, eating spicy foods or drinking alcohol. Wearing clothing that makes a person too warm can also set off a flareup. EM is also considered a form of peripheral neuropathy because it affects the peripheral nervous system, which detects pain, smell and touch.

Why use CBD topical for erythromelalgia?

As I did my research, this was the question I asked myself. So, more research. CBD, short for cannabidiol, is one of many compounds found in the cannabis plant. Unlike THC, also found in cannabis plants, CBD is nonpsychoactive, meaning it won’t get you high. Lost Remedy uses hemp-derived CBD in all of our products. We also use full-spectrum CBD, which contains all the cannabinoids and terpenes. Full-spectrum is important because the cannabinoids and terpenes work together to increase CBD’s efficacy.

Humans also have an endocannabinoid system that establishes and maintains homeostasis in our bodies with the help of CB1 and CB2 receptors. When the balance is off, the receptors can’t do their jobs. Illness or imbalance occurs. On the other hand, to kick-start the ECS, small doses of CBD can signal the body to make more endocannabinoids and build more cannabinoid receptors.

Now that you have some background, let’s look more closely at CBD topicals and pain.

CBD has long been heralded for its anti-inflammatory, analgesic and antibiotic properties. As I’ve already noted, EM is distinguished by burning sensations that also cause skin redness. The Burn Formula was engineered specifically to cool and soothe the burning from radiation treatment as well as sunburn and other burns. It also can help protect and heal skin.

By applying a CBD topical directly to a painful area, it goes to work quickly because it doesn’t need to travel through the blood stream. Its active ingredients interact with CB2 receptors in our skin to help relieve pain and cool the burn because of its anti-inflammatory component. It can also help heal the pain and protect broken skin from infection.

Because EM is considered a neuropathic condition, other CBD topicals may also be beneficial. There’s no guarantee that a CBD topical will relieve EM pain and the burning sensation because, as I’ve indicated, everyone is different. In addition, there isn’t enough research to say definitively that it helps.

All we have right now is anecdotal evidence from people with EM pain who use CBD topical and found relief. But, if it isn’t going to harm you and it does work, it might be worth trying if other medications have fallen short.