What do you need to know about arthritis and CBD topicals? I’ll tell you shortly. But first, I’ll tell you about a new study that doesn’t bode well for arthritis sufferers who use over-the-counter (OTC) medications to relieve pain.

“We were surprised by the findings,” the study’s lead author, Dr. Johanna Luitjens, a postdoctoral scholar in the department of radiology and biomedical imaging at the University of California, San Francisco, tells TODAY.com. “We actually thought we would see the opposite of those outcomes with people who take NSAIDs having less inflammation.”

Researchers compared the results of the 1,000 current participants with arthritis patients’ results from four years ago. They found that there was significantly more inflammation in patients who regularly used NSAIDs. That is surprising because NSAIDs are anti-inflammatories. What now, you may wonder. Well, let’s lay out some facts about arthritis. 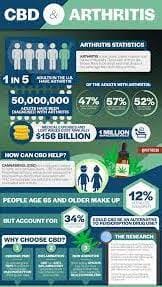 Osteoarthritis, the most common form, causes the cartilage in a joint to break down causing changes to the underlying bone. According to the Centers for Disease Control and Prevention, arthritis develops slowly over time as wear and tear breaks down the cartilage, which causes friction and subsequent pain. It also:

This last bullet is a good reason to recommend a CBD topical to help relieve arthritis pain.

CBD, or cannabidiol, is a component of hemp. CBD is a known anti-inflammatory, antibacterial, antioxidant and analgesic. You apply an arthritis CBD topical directly to the painful area. The act of massaging the topical into the skin opens the pores and allows the CBD to penetrate. Therefore, relief can occur more quickly than if you ingested or used CBD sublingually. CBD topicals are safe to use as often as necessary without many, if any, side effects. They won’t get you high and they don’t enter the bloodstream. Plus, you won’t become addicted.

Instead of numbing the pain as OTC medications tend to do, CBD reduces the inflammation that causes it. A 2016 study on rats indicated they showed fewer pain-related behaviors and had lower inflammation indicators within four days of treatment with a CBD topical.

Relief is made possible by the Endocannabinoid system (ECS) we all have. This system of cell-signaling CB receptors rush to the site of disturbance to create balance. Our ECS is always regulating balance and watching out for imbalances. When imbalance occurs, the ECS produces cannabinoids that interact with receptors. The chemical process that occurs targets and resolves the imbalance to restore perfect balance.

Sometimes, however, the receptors need a little help. That’s where CBD comes in. As I mentioned above, it’s a known anti-inflammatory, antibacterial, analgesic and antioxidant. Apply CBD topicals directly on the skin at the area of pain. All of the hemp-derived nutrients are almost instantly absorbed, allowing a quicker, more focused relief. Researchers believe that CBD doesn’t attach directly to the receptors. Instead, it activates them, which allows for many of the health benefits that people associate with the CBD.

CBD that works for you

CBD has come on the market like gangbusters since the 2018 Farm Bill made CBD legal in most states. However, don’t assume just because a product says CBD on the label, it’s what it claims to be. Because CBD is not regulated, almost anything goes. So, choose wisely and know what you are getting.

Read the label. What’s in the product in addition to CBD? Are there just natural ingredients, or have chemicals been added? Where was the hemp grown? Is it organic? It should be. Is the CBD made from the whole plant or is it an isolate? Full-spectrum hemp oil, or FSHO, has all the beneficial cannabinoids and compounds. Was the CBD tested? A product should be tested by a third-party lab to ensure that the CBD is what its label claims. A company willing to undergo scrutiny by an independent lab has nothing to hide. Look for high levels of CBD, with trace levels of several other cannabinoids such as CBG and CBN to name a few.