When nerve pain takes degrades your quality of life, you may be ready for CBD topicals. 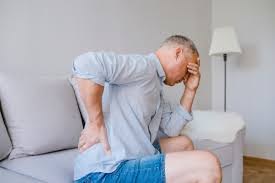 Opioids, the most common product prescribed for chronic pain, has a whole raft of problems, not the least of which is addiction and potential death. Not exactly a comforting option. CBD products are an alternative may alleviate pain without the dire consequences.

People with chronic pain can use Lost Remedy CBD balm for nerve pain, to help relieve pain caused by sciatica, neuralgia and other damage to sensory, motor or autonomic nerves. “I know so many people who have issues with nerve damage and old injuries,” says Karen. “It’s especially helpful for sciatica and people who’ve had surgery and their nerves were cut, and the pain associated with that.”

The sciatic nerve runs through your body starting in the lower back, moving down the hips and buttocks through the back of your leg. This nerve is about the thickness of your pinky finger and when it lights up with pain, you know it.

Sciatica occurs when the nerve is compressed because of a herniated disk, bone spurs or narrowing of the spine. The resulting inflammation and pain can radiate down your leg. In severe cases, you may lose leg strength or bowel or bladder control. In those instances surgery may be necessary.

As I’ve often repeated in this blog, CBD is an anti-inflammatory and inflammation is the root of sciatica. Most often, rather than turn to CBD, doctors prescribe paracetemol or ibuprofen, nonsteroidal anti-inflammatory drugs (NSAIDs). However, they often fall short of being effective, at which point the big guns – Pregabalin, Gabapentin, Naproxen or Codeine – are called in. But even though some relief can be realized with them, it comes at a cost. Side effects from these products can include fatigue, visual issues, memory loss and depression to name a few. Other medications prescribed are opioids, which are addictive, as we well know from the crisis that seems to have exploded in this country the past few years.

CBD does not cure sciatica, but it can help relieve the symptoms caused by inflammation, because: anti-inflammatory. A 2016 research report in FASEB Journal claims, “Cannabinoids apparently act on inflammation through mechanisms different from those of agents such as NSAIDs. As a class, the cannabinoids are generally free from the adverse effects associated with NSAIDs.”

Fibromyalgia also has gotten good results with CBD. It’s a chronic condition, and treatment for it isn’t terribly effective. The symptoms can fluctuate in intensity, location and duration. Fatigue, sleep disturbances, cognitive difficulties (memory problems or thinking clearly), and stiffness are the most reported symptoms.

Recently, a young woman who suffers from fibromyalgia received a gift of Lost Remedy CBD balm for nerve pain. After using the cream for a month, she says, “Seriously! You have a slam dunk here. I’ve tried so many things and this has been life-changing!” Adding, “It really has helped not only with my fibromyalgia but also pain associated with my narcolepsy, and has helped me sleep better!”

Numerous studies show that hemp-infused CBD for nerve pain lowers the intensity safely. Two studies by the National Institutes of Health show its efficacy in pain that hadn’t responded to other more mainstream products, as well as pain associated with multiple sclerosis. When pain is relieved, people with chronic pain have:

Both are important factors in regaining quality of life. And there were no safety concerns for the people using it.

Our CBD balm for nerve pain is nontoxic and contains no chemicals. The Nerve Pain Relief combines CBD with essential and carrier oils, all of which are absorbed quickly to deliver healing benefits of all the oils. It acts as a sedative to calm the nerves, easing the sharp pain associated with nerve damage.

If you suffer from chronic pain, you owe it to yourself to give this safe, effective product a try.